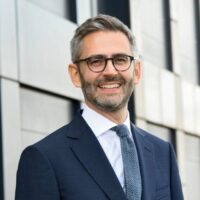 Joshua Burch is a Senior Managing Director and the Head of Cybersecurity for the Europe, Middle East, and Africa Region at FTI Consulting. Mr. Burch has more than 20 years of leadership experience as an international security, strategy, and risk expert.

Prior to joining FTI Consulting, Mr. Burch worked for the British government where he spent more than 15 years in a range of national security roles, including Chief of Staff (2017-2019) to one of the UK’s most senior national security officials. Before this, Mr. Burch was Head of the Strategy & Risk team at British Sigint and cybersecurity agency GCHQ (2016-2017). In his various roles, Mr. Burch focused on understanding and mitigating global strategic threats from nation states, terrorists, and malicious cyber actors.

Before his government career, Mr. Burch spent five years at Goldman Sachs International in London where he was a corporate finance and mergers & acquisitions specialist in the firm’s investment banking division.

Mr. Burch has an M.A. in European & Middle Eastern Studies (Arabic and Spanish) from the University of Oxford.